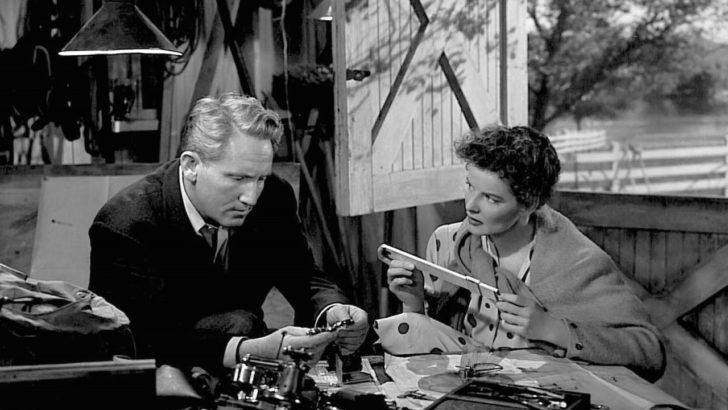 Released in 1945, Without Love is the third of Spencer Tracy and Katharine Hepburn’s Nine films together. Based on a play by Philip Barry and a screenplay by Donald Ogden Stewart (The Philadelphia Story) Spencer Tracy plays Patrick Jamieson, a military research scientist working on a secret project for the war department. As the film begins, he arrives in Washington DC without a place to stay. He meets a drunk who often stays in a big townhouse owned by his widowed socialite cousin, Jamie Rowan (Hepburn). She allows Pat to stay on, and work on his project in the basement.

Pat’s heart has been broken by an unseen love interest named Lila. Jamie is still recovering from her beloved husband’s sudden death. As a result, both believe that falling in love again is impossible. However, shortly after they meet, sparks are obvious. As Jamie states to Pat, “You never want love in your life again and I never want it in mine. But our reasons are as different as the sun is from the moon. You don’t want it because you’ve had all the worst of it. I don’t want it because I’ve had all the best.”

In time, She and Pat realize they have much in common and decide they will marry in name only; since she has a scientific background, she can help him with his project and they’ll enjoy each other’s company. They agree to have, “A good and happy marriage without love.”

Things seem to move along smoothly with the two best friends working together. Neither Pat nor Jamie count on jealousy–Jamie of the unseen Lila, and Pat of his old friend Paul (Carl Esmond), who shows an interest in Jamie–or in falling in love.

A predictable romantic comedy, Without Love is one of the lesser Tracy/Hepburn pairings. Even so, the film does provide some laughs. Pat is a sleepwalker and Jamie’s reaction to finding him in her bed is priceless. Let’s face it, watching Spencer Tracy and Katharine Hepburn work together is always a treat. Two of the greatest actors ever, they have an undeniable and special chemistry. The supporting cast helps a lot Keenan Wynn is the drunk, and Lucille Ball is attractive as a socially active young lady, though she isn’t given all that much to do. Never a bad film, Without Love might be described as chronically sluggish. To be enjoyed by fans of the cast, but never considered among topflight Tracy/Hepburn pairings.

Presented in the 1.37:1 aspect ratio, Warner Archive has delivered an excellent 1080p transfer, despite a few inconsistencies. Sharpness is generally satisfying throughout, with only minor areas of softness in the occasional shot. Shimmering and edge haloes are absent. The film’s grain structure retains a lot of lifelike quality and print flaws fail to mar the proceedings. Blacks are dark and deep, and contrast comes across well. Shadows held up nicely, though a few nighttime exteriors look a bit murky. While the image doesn’t excel, Warner Archive has provided another strong transfer.

The LPCM monaural soundtrack has held up well for the last 75 years. Dialogue can sound a bit thin at times, but lines are always concise and understandable. Music and effects showed the expected restricted range but has nice clarity. This is a more than competent track given its age. 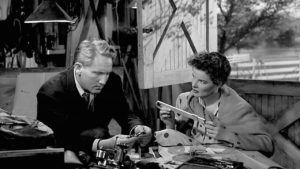