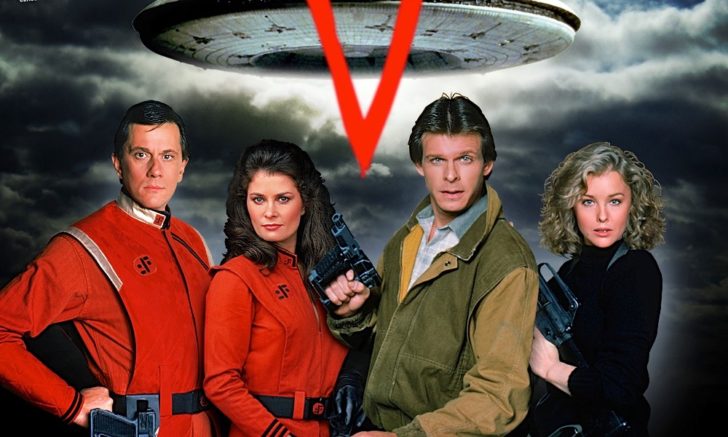 Created by Kenneth Johnson (The Bionic Woman) V, inspired by Sinclair Lewis’ 1935 anti-fascist novel It Can’t Happen Here, first aired over two nights in 1983, proved to be a huge hit with viewers. With over sixty speaking characters, V was truly an epic event. Flying saucers appear in the sky over Earth’s Fifty major cities. For two days, the ships just hover, not making a sound, giving no indication of their purpose. The world waits…anxiously, cautiously. Eventually, the Visitors reveal themselves…They seem surprisingly normal. Indistinguishable from humans (except maybe the blue blocker shades and warbly, monotone voices). They even adopt human names to help the Earth’s population feel more comfortable around them.

The Visitors have traveled light years to locate a planet with a rare chemical that will enable their own planet to survive. Supreme Commander John (Richard Herd) and his assistant Diana (Jane Badler) offer assurances of wisdom and friendship in return. As the Visitors begin to assimilate themselves into local neighborhoods, strange things begin to happen. Mike (Marc Singer) a TV news camera man, begins to investigate several disappearances around town. Julie (Faye Grant), a biochemist, is trying to figure out who the Visitors really are, only to find herself targeted by their impressive propaganda efforts. She becomes a leader in the resistance movement, fighting to protect the future of Earth.

Everything about V is reminiscent of Nazi Germany. Propaganda is important. Their flag has a symbol that looks like a swastika. On Earth they form a youth league to indoctrinate teenagers. Some humans choose to turn a blind eye to the budding dictatorship, while others join the fight against oppression. Diana enjoys performing gruesome experiments on humans, reminiscent of   Josef Mengele. Chilling. Writer/director Kenneth Johnson handles the material skillfully, adding a degree realistic terror that many science fiction films can’t match.

While V: The Original Miniseries can be slightly heavy handed at times, solid performances from the talented cast make for worthy entertainment. Marc Singer shines as a TV cameraman as a journalist searching for the truth, while Richard Herd’s Alien Commander, John, is a charismatic diplomat and showman when necessary. Though Kenneth Johnson has a large cast of characters, he uses the 197-minute runtime to effectively explore the personal lives of those who reject evil and those who embrace it.

Watching V more than thirty-five years after it originally premiered, the narrative still works and the message still resonates. There’s plenty of action to keep things moving and a little bit of seduction that’s in line with the story. There’s plenty to hold viewers’ attention, both old and new, alike.

Newly remastered and presented in its original 1.85:1 aspect ratio, Warner Archive’s 1080p transfer is impressive. The level of detail does a great a job of showcasing the productions careful attention to costuming and practical effects. It also points out a few technical limitations of the time, inevitable when watching something more than thirty-five years later.  Human faces look normal, while the alien faces are reasonably textured, capturing a lizard like feel. Colors are well maintained, with the bold crimson on the Visitor uniforms and green skin emphasized. Grain is film-like and framing appropriate. The image is free of any debris or digital issues, making for a pleasant viewing experience.

The DTS-HD MA 2.0 soundtrack delivers a surprisingly powerful mix. The soundfield is wide, that communicates production essentials well, despite obvious limitations. Dialogue is clean, clear and concise throughout. Sound effects are well placed, providing the punch expected. Explosions have a nice amount of depth and strong ambient sounds only add to the strength of the track.

The following extras are available. 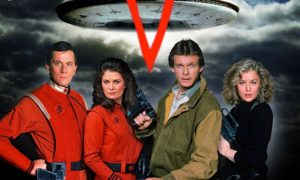 Crystal Lake Memories: The Complete History of Friday the 13...
Menu