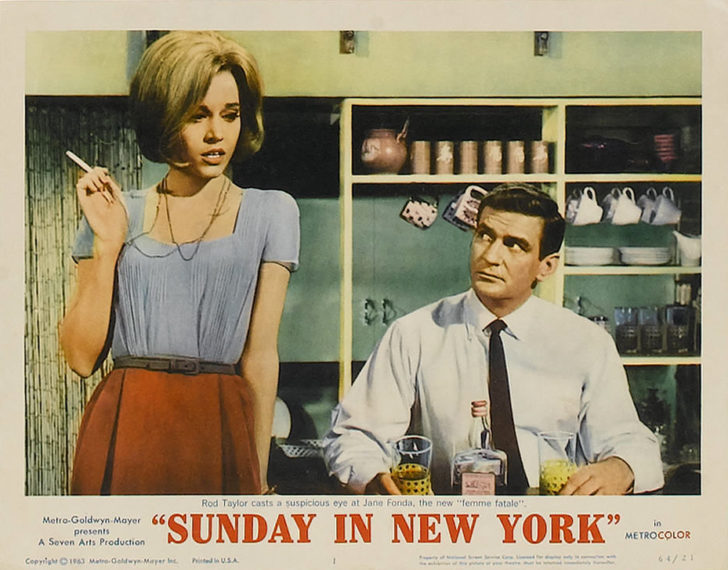 Released in 1963, Sunday in New York is the kind of lukewarm sex comedy–pre-sexual revolution–only that era could produce. Eileen, played by a young Jane Fonda, is a virgin from Albany annoyed by the fact that all her suitors end up trying to take her to bed. Afraid that her relationship with a handsome heir to a big fortune (Robert Culp) will end due to her “inexperience,” she travels to New York, to get some advice from her big brother Adam (Cliff Robertson), an airline pilot and ladies’ man. Wanting to be the model big brother, Adam keeps his ladies’ man status a secret from Eileen.

Almost as soon as she arrives, Eileen asks Adam a rather blunt question: Is it expected of a woman to go to bed with a man after a certain amount of time, even if she isn’t married to him? Startled, Adam informs her that no decent woman should ever feel the need to go bed with a man before marriage. Though he’s on call at work, his sister’s visit has interfered with his plans to meet Mona (Jo Morrow), a “friend with benefits.” With Eileen in the apartment, the couple is forced to seek another bedroom in which to pitch woo. When that call from the airline comes in, Eileen goes in search of her brother, so he won’t lose his job. On the bus to Rockefeller Center (Adam and Mona claim to be going ice skating), Eileen runs into Mike (Rod Taylor), a writer in the city for the day to chase girls. He flirts with Eileen; she blows him off, only to have him find her again. Believing its fate, Eileen surrenders to Mike’s charms, only to have him back away upon discovering she’s a “vi–beginner” (that’s the word they use for virgin, this is 1963). As the two have an argument over morality, Eileen’s her boyfriend appears and asks her to marry him. Her would-be fiancée simply assumes the man in the bathrobe is her brother and since no other story comes to mind, the surprised pair run with that story. But then of course, the real Adam comes home.

While Sunday in New York would be categorized as farce, there aren’t as many laughs as one might expect. Not overly memorable, the film is probably best reserved for those Jane Fonda fans who wish to see her in one of her earliest roles. She truly is an ingénue here.

Presented in the 1.85:1 aspect ratio, Warner Archive’s new 1080p master has eliminated most of the issues that plaque the earlier DVD release. The colors have a nice pastel appearance, but the digital noise that gave the DVD a hazy appearance is now gone, replaced by a strong image throughout. Most of the scratches on the source material are no longer visible, making for a much more enjoyable viewing experience. Fans should be eager to make this upgrade.

The DTS-HD MA Audio 2.0 track sounds noticeably fuller, allowing Peter Nero’s soundtrack to soundtrack to feel more appropriate for the era, and less metallic. Dialogue is clean, clear and concise. There are no hisses, clicks, or anomalies in evidence. 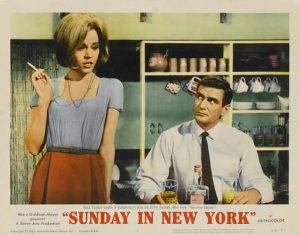