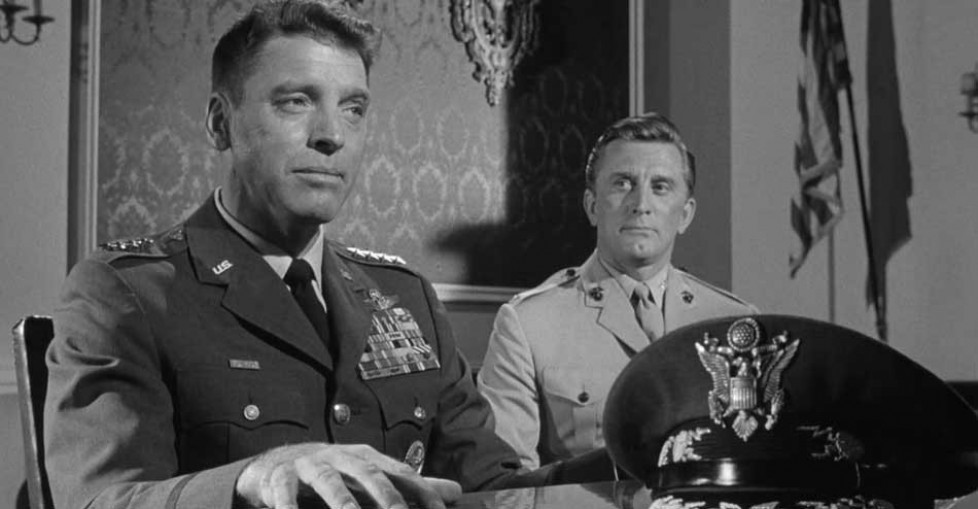 Scripted by Twilight Zone creator Rod Sterling and directed by John Frankenheimer (The Manchurian Candidate (1962)), Seven Days in May is based on the novel of the same name by Fletcher Knebel and Charles W. Bailey II.  A tense and exciting Cold War drama, not a fire is shot, and there isn’t one car chase. The drama lies in the source of the conflict, and wondering just what will happen next. The film features a stellar cast that includes Kirk Douglas, Burt Lancaster, Ava Gardner, Edmond O’Brien, and Martin Balsam.

A very unpopular U.S. President, Jordan Lyman (Fredric March) has signed a nuclear disarmament treaty with the Soviet Union, only to find that the ratification of that deal has put him at the center of a political firestorm. The defense industry is in crisis, there’s high unemployment, and many Senators, under pressure from their constituents, want something done about it. If that weren’t enough, many in the military believe the Soviets simply can’t be trusted. One such person is General James Mattoon Scott (Burt Lancaster), the popular head of the Joint Chiefs, who views the treaty as the ultimate betrayal of national security. As the debate heats up and Lyman’s poll numbers continue to drop, Scott and the rest of the military are preparing for seemingly standard maneuvers. However, Scott’s aide, Colonel James “Jiggs” Casey (Kirk Douglas), begins to come across several odd details regarding the maneuver. After significant investigation, Casey comes to a disturbing conclusion: General Scott is planning a coup during the upcoming maneuvers. The Colonel nervously informs the president of his findings. Lyman decides to send a group of his most trusted advisors to gather more evidence laying such serious charges at Scott and his co-conspirators. The clock is ticking though, they only have a few days to unravel what’s going on.

Unlike most contemporary political thrillers, Seven Days in May doesn’t give audiences just one hero who would bring down the conspiracy. Instead, the story makes clear that everyone involved is a patriot. Even General Scott, who, with twisted logic, believes what he is doing is for the good of the country. For Jiggs, who always admired Scott, there’s a moral dilemma; while he agrees that nuclear disarmament is the wrong course of action, his belief in following the Constitution is stronger. Kirk Douglas is excellent as the conflicted officer, displaying a complex range of emotions under a facade of military toughness. Frequent Douglas co-star Burt Lancaster is forceful as a general who sees himself as the ultimate patriot, even as he leads such a treacherous act. Fredric March is also very good as the unpopular president. Thought to be weak, he is forced to find strength at a time of real crisis; while Edmond O’Brien provides some moments of levity as Senator Raymond Clark of Georgia. The always reliable Martin Balsam turns up as Paul Girard, aide to the president, and one of his most trusted friends.

The weakest part of the film is a subplot involving General Scott’s former mistress, played by Ava Gardner. Obviously introduced just to add a female into the mix, Gardner is fine, but her scenes are largely unnecessary, often taking viewers away from moments of tension. That aside, more than fifty years after it was released, Seven Days in May remains a thought provoking film.

Presented in the 1.78:1 aspect ratio, Warner Archive’s 1080p transfer looks stunning. Boasting a fine layer of film grain, contrast is spot on, and Blacks are appropriately inky. The image is free blemishes or debris throughout. The level of detail is first rate. Every mark and wrinkle on Burt Lancaster’s face is evident, and the Kirk Douglas’s dimpled chin never looked so good. This transfer is everything high definition video should be.

The DTS-HD Master Audio 2.0 soundtrack delivers clean and clear dialogue throughout. Jerry Goldsmith’s score has been given a nice amount of heft despite obvious limitations. While sound effects are limited here, ambient sounds–car motors, a brief scene with a helicopter, a phone ringing–come through confidently. There are hisses, pops, or other audio issues in evidence.

Blu-ray Review: Watchmen – Tales of the Black Freighter & Under the Hood

Blu-ray Review: Who Saw Her Die?