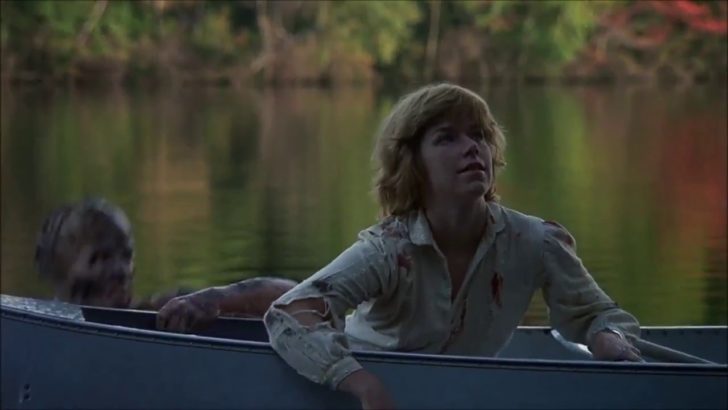 Inspired by the success of John Carpenter’s Halloween two years before, Friday the 13th was made on a budget estimated to be $550,000 and went on to gross over $39.7 million at the box office in the United States and went on to become one of the most profitable horror films in the history of cinema. Friday the 13th also holds the distinction of being the first movie of its kind to get distribution in the United States, when Paramount Pictures agreed to do the honors.

Produced and directed by Sean S. Cunningham, Friday the 13th has a bare bones plot, put into place to allow lots of bloodletting and grisly killing. Steve Christy (Peter Brouwer) is reopening Camp Crystal Lake after it has been shuttered for at least twenty years. Set in out-of-the-way New Jersey, the camp was closed after a series of terrifying events happened there–events that included the murders of several young people. Residents refer to the place as “Camp Blood.”

Predictably, a group of actors all in their early twenties are called upon to be the victims; all naïve college students on summer break, helping to open the camp. There are Alice (Adrienne King), Marcie (Jeannine Taylor), Annie (Robbi Morgan), Brenda (Laurie Bartram), Jack (Kevin Bacon), Bill (Harry Crosby), and Ned (Mark Nelson). Obviously, the names that stand out are Harry Crosby, son of Bing Crosby and Kathryn Grant, and Kevin Bacon, whose only notable previous appearance had been in Animal House.

There are also several peripheral characters that serve to make things interesting. Crazy Ralph (Walt Gorney), runs around the camp telling the kids their all doomed if they stay; Officer Dorf (Ron Millkie), is a none too smart, uptight, motorcycle cop, Jason (Ari Lehman), who makes his first appearance here and Mrs. Voorhees (Betsy Palmer), the mother of the aforementioned Jason.

Most of the college students begin to die rather beautifully. Composer Harry Manfredini’s background score creates a great sense of the horror at the camp. It is obvious that Manfredini was influenced by the great Bernard Herrmann, as there are components of Psycho and North By Northwest in the score. Much credit for the success of Friday the 13th should also be given to Tom Savini, who handled the makeup and stunts on this movie. His tremendous abilities made this low budget film look better than a lot of big budget horror films.

This Blu-ray is a re-release of the 2009 uncut version of the film. The only difference in this release is the Steelbook packaging.

Presented in the 1.78:1 aspect ratio, this 1080p transfer looks strong. This is a rough-looking film in many spots, and the opening sequence, in particular, isn’t all that pretty, but it looks good considering the source. It’s excessively grainy and rather dark, but improved clarity and resolution over previous releases is immediately noticeable. Once the film gets past the opening credits, becomes a sharper, more colorful, and more richly detailed presentation, revealing plenty of impressive visuals. The opening shots of Annie hiking to the camp are well done; the exterior shots of the town and the interior of the store both look great. The film truly shines in these bright, outdoor, daylight sequences; colors are bright and natural. Even background details are solid. Blacks are fairly noisy, maybe a bit faded, but they remain a deep black rather than a shade of gray. The print exhibits a few speckles here and there, but the source is in very good shape otherwise.

Friday the 13th comes equipped with a Dolby TrueHD 5.1 lossless soundtrack in addition to a monaural presentation. This is a nice audio presentation in the context of the source. It is somewhat front-heavy but also rich and full sounding. Throughout the film, sound effects and dialogue are strong. Friday the 13th could have benefited from a remix to incorporate the back channels and subwoofer more, but it’s better to stick as close to the original presentation as possible. This lossless track allows room for the track to breathe a bit, spread out across the front, and offer more in the way of fidelity and clarity.

There’s a solid collection of extras on the Blu-ray disc. First off, there’s the customary audio commentary, this time not only by the director, Sean Cunningham, but with writer Victor Miller, actresses Betsy Palmer and Andrienne King, composer Harry Manfredini, special-effects supervisor Tom Savini, executive producer Alvin Geiler, and host Peter Bracke. Unlike most commentaries, their discussion is not scene specific but rather a freewheeling chat about the film and the filmmaking.

The featurettes come next, most of them newly made in 2008. “Friday the 13th Reunion,” (HD) filmed September 13, 2008, is a seventeen-minute question-and-answer session with many of the folks from the commentary in front of an appreciative audience. “Fresh Cuts: New Tales from Friday the 13th” (HD) is a fourteen-minute selection of behind-the-scenes stories about the casting, music, and characterizations in the film. “The Man Behind the Legacy: Sean S. Cunningham” (HD) is nine minutes in which the director discusses the movie. And “Lost Tales from Camp Blood, Part 1” (HD) is a newly filmed seven-minute scene. “Friday the 13th Chronicles” is a twenty-minute discussion of the film and the filmmaking. “Secrets Galore Behind the Gore” is a nine-minute segment with Tom Savini on the film’s special effects and how they did that stuff before the advent of CGI.

[Parts of this review were published previously on this site.] 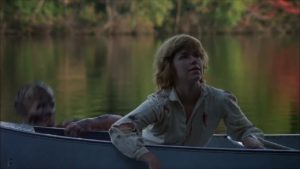