Rebecca has a B.A. in the Humanities with an emphasis in film and writing. She holds an M.A. in American and British literature. She loves to explore all film genres, but has a special place in her heart for big epics like "Cleopatra" and "Ben-Hur."
Tweet
Share
Pin
Share
0 Shares 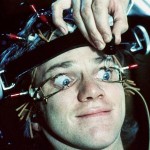 In a filmmaking career that spanned over fifty years, Stanley Kubrick had a fondness for taking the novels of others and reshaping them to fit his own vision. Of the 16 movies Kubrick directed (including his final film, Eyes Wide Shut), he was given a screenwriter credit on twelve of them. For that reason, 2001 is not referred to as “Arthur C. Clarke’s 2001” but as “Stanley Kubrick’s 2001.” Dr. Strangelove is “Kubrick’s Strangelove” not Peter George’s. And though The Shining is based on a novel by the legendary Stephen King, it was Kubrick and co-writer Diane Johnson, who fashioned the film. Similarly, the driving force behind A Clockwork Orange was more Kubrick than novelist Anthony Burgess.

There was me, that is Alex, and my three droogs, that is Pete, Georgie and Dim, and we sat in the Korova Milkbar trying to make up our rassoodocks what to do with the evening. The Korova milkbar sold milk-plus, milk-plus vellocet or synthemesc, or drencrom, which is what we were drinking. This would sharpen you up and make you ready for a bit of the old ultra-violence.

So begins A Clockwork Orange. The film depicts a time in the not-so-distant future where sadistic hoodlums rule the streets, breaking into houses, raping women and beating up innocent bystanders with disregard for their wellbeing. Malcolm McDowell (in a star-making turn) plays Alex, the leader of one of these groups. We first meet him in a bar having a glass of drugged milk with his “droogs”—Pete (Michael Tarn), Georgie (James Marcus), and Dim (Warren Clarke)—as they prepare for what is lovingly referred to as “ultraviolence.”

However, Alex’s life takes an unexpected turn when he when he kills a woman and is attacked by his “droogs,” left to be captured by the police. Sent to prison, Alex is given the opportunity to regain his freedom by participating in a scientific experiment that will supposedly rehabilitate him.

The treatment is unorthodox to say the least. Alex is place in a straight jacket with his eyes propped open in front of a movie screen projecting scene after scene of sex and brutality. While watching all of this, he’s given nausea inducing drugs, in an effort to create a physical aversion to the emotions associated with everything he is seeing. No matter how many times I see A Clockwork Orange, I always find this scene deeply unnerving. The therapy works, but for Alex it comes with one very unfortunate side effect—he loves music; since Beethoven’s Ninth Symphony was playing in the background during the clips, Alex has developed an aversion to Beethoven.

So, was the treatment worth it, if all of Alex’s personality was simply wiped away? Has Alex now become a moral man, or just a programmed shell? Do those he hurt before deserve some sort of retribution now that he’s reformed and can’t fight back? These are the questions A Clockwork Orange dares to ask. Under Kubrick’s brilliant direction, the film doesn’t just comment on violence, he puts it right out in the streets and forces viewers to evaluate their own reactions to it, and along the way, reconsider what they define as civility.

Over a high speed cable connection, the 1.78 GB file took just short of two hours to download. This is not a quick process, so you might want to have it downloading while you’re accomplishing regular daily tasks.

The video quality itself is quite good. Colors are extremely vibrant when viewing on an iPad, or 22″ high resolution computer monitor.  It also looks fine on the smaller screen of an iPod.  There are only a few instances of noticeable artifacing,  as is the case with the recently released Blu-ray digibook.

You get the following special features with the film: