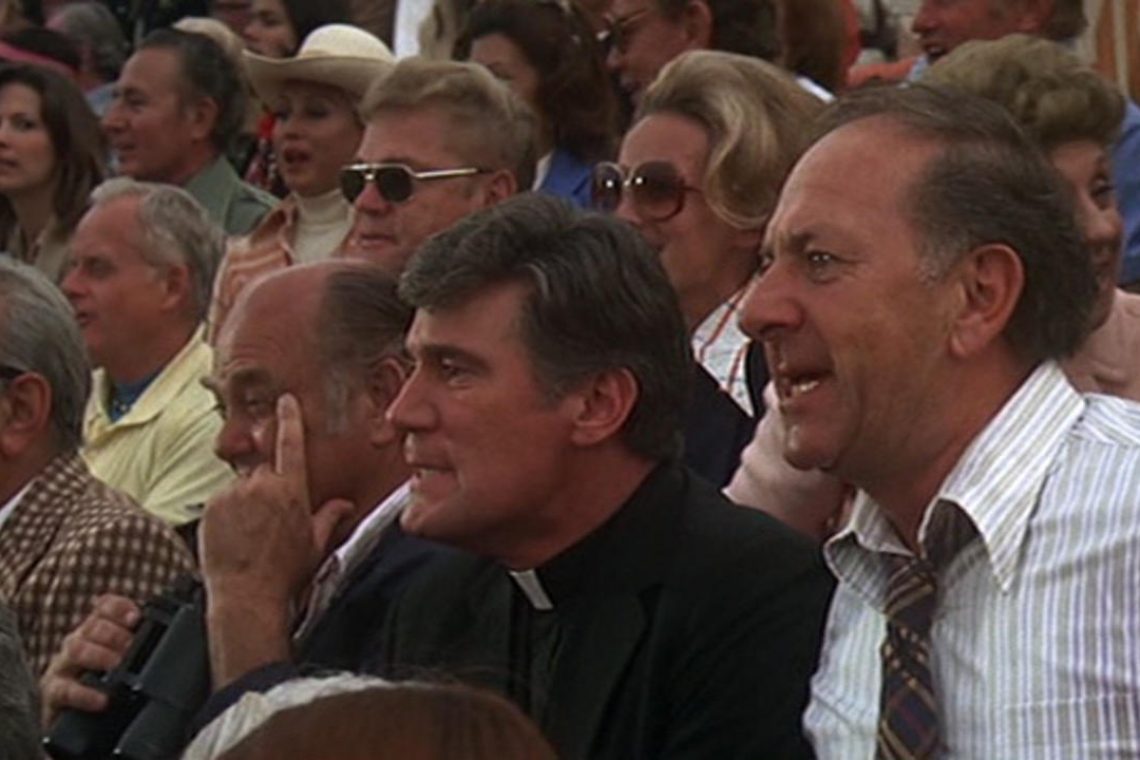 Released in 1976, Two-Minute Warning tries to be a thriller, but falls back on the predictable characteristics of the popular but fading disaster genre of the era. Despite a cast that includes Charlton Heston, John Cassavetes, Martin Balsam, Beau Bridges, Marilyn Hassett, David Janssen, Jack Klugman, Mitchell Ryan, Walter Pidgeon, Gena Rowlands, Brock Peters, David Groh, Jon Korkes, Anthony Davis, Pamela Bellwood, Andy Sidaris, Allan Miller, and Joe Kapp the film was largely avoided by audiences who were indifferent to it, or turned off by the violence.

We know from the start there’s a gunman on the loose. Though he remains, nameless, faceless, even, in the opening minutes of the film he shoots and kills a middle aged man jogging with a woman, and calmly drives on. From there, he carefully makes his way to the biggest event of the year. His deliberate movements tell us he means business. Why this person is hell-bent on creating havoc is an open question, he just is.

It’s “Championship X” Sunday at the Los Angeles Memorial Coliseum, with “Baltimore” visiting defending “Los Angeles.” Everybody whose anybody is there, and the rest of the country is watching on television. Oddly though, even as various characters are introduced, and make their way to the stadium, you can’t help but feel their lambs being led to the slaughter. Among them are: Mike and Peggy Ramsay (Beau Bridges and Pamela Bellwood) are a young married couple with their children; Steve and Janet (David Janssen and Gena Rowlands) are a quarrelsome middle-aged couple; Stu Sandman (Jack Klugman), a gambling addict whose life depends on the outcome of the game; and Mitchell Ryan plays a Catholic priest and friend of aging Los Angeles quarterback Charlie Tyler (Joe Kapp). We get to know these characters just enough to feel badly when they face death. Who will die? Who will survive?

When the sniper is spotted by a blimp camera, the police are called into action. Captain Peter Holly (Charlton Heston) is the guy in charge. Wearing an ill-fitting suit, Heston does surprisingly little. Arriving at the stadium, he does a lot of worrying about traffic control (exciting, I know). He and SWAT leader Sgt. Chris Button (John Cassavetes) know they must empty the stadium before the gunman fires a shot. However, since there wouldn’t be much of a film if that plan worked, it’s pretty obvious chaos is close at hand. Some of the characters will be needlessly killed by the snipers high-powered rifle, thousands trampled by the rushing crowd. Others will miraculously survive (the riot scenes are nothing short of amazing. As all this is happening, the police continue their hunt…

At times throughout the film, the camera lets us see things from the sniper’s perspective, which only made me want to know more about his motivations. While his face is finally revealed, information about him is left unrevealed. To that end, Two-Minute Warning is a film best reserved for those of us who can’t get enough of 1970’s disaster movies. Despite all of the big names in the cast, none of their performances really stick out.  It’s all so over the top!

Shout Factory’s 2k 1080p HD widescreen 2.35:1 Blu-ray transfer is surprisingly good. Image detail is impressive throughout. Given the films age, it’s no surprise that the colors are a bit muted, though they never look washed out. Contrast is well balanced, and grain is handled well. There are no compression issues of note.

The DTS-HD Master Audio mono track serves the film well. Dialogue is clean and clear throughout, and no distortion is in evidence.

* Despite a listing on the box, there is NO Director’s Commentary.