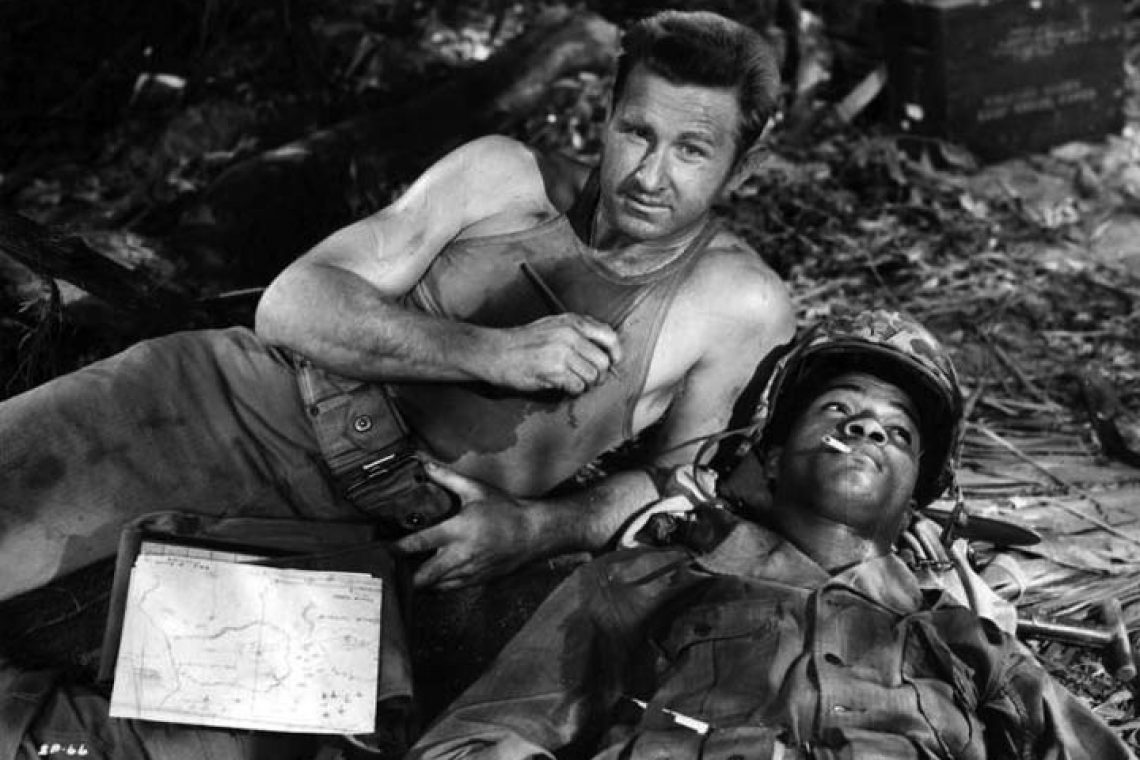 Independently produced by Stanley Kramer (High Noon, Guess Who’s Coming to Dinner), Home of the Brave was based on the successful Broadway play by Arthur Laurents. Kramer, famous for making “message” movies throughout his career, made one significant change. In the play, the hero was a young Jewish soldier, the victim of anti-Semitism within the military. Kramer substituted an African American character for the Jewish protagonist.

Set during World War II, and told through a series of flashbacks, the story describes the gradual emotional breakdown of African American private Peter Moss (James Edwards). Now in a military hospital, a sympathetic army doctor (Jeff Corey) is trying to uncover the psychological cause of his paralysis. Through a series of treatments, the unnamed doctor uncovers that Peter endured lots of harassment while on a special five-man mission to a Japanese-held island. Repeatedly excluded, and treated cruelly, he had cracked under the pressure.

Moss’ experiences on the island were simply the last straw. He had faced a lifetime of prejudice, and didn’t know how to deal with it. The racism that was a part of everyday American life had made him feel “outside the human race.” As a surveyor, he volunteered to join the team put together by 26-year-old Major Robinson (Douglas Dirk) that includes the bigoted Corporal T. J. Everett (Steve Brodie), a cartographer named Finch (Lloyd Bridges) and a disgruntled sergeant named Mingo (Frank Lovejoy). Finch recognizes Moss as an old friend and basketball teammate from their schooldays. Initially, Robinson is none too pleased that his superior has sent a colored surveyor. However, he’s told to use anyone who can help, be they purple or otherwise.

During their mission on the island, the men work to carry out their mission despite some tension. Finch and Moss revive the friendship they enjoyed years before, and even discuss opening a bar together after the war. Mingo speaks often of his wife, who writes poetry. One says, “Divided we fall, united we stand, coward take my coward’s hand.” But the letter he still can’t forget is the last one that starts out, “Dearest, this is the hardest letter I’ve ever had to write.” War has many costs…

Though the Home of the Brave may seem cautious today, when viewed in context, it’s quite moving. Released just a year after President Harry S. Truman integrated the armed services, it packs an emotional punch. The doctor isn’t afraid to say that 150 years of slavery and racism have affected Moss. Before this, no film had really dared to make such statements. The real power of the film comes from the unforgettable performance by James Edwards. His tension and sensitivity is palpable throughout. It’s clear that Moss is trying his best to make some sort of connection to a white world that has repeatedly rejected him.

An interesting side note: Home of the Brave was shot in secret. Stanley Kramer called it High Noon, a title he used a few years later.

Presented in the 1.37:1 aspect ratio, Olive Films hasn’t done a full restoration on this one. As a result, a few scratches and specks can be seen throughout. The black levels look pretty good, and the heavy contrast adds some nice heft to the presentation. Detail is okay, but nothing extraordinary and depth is minimal. Grain textures are rather rich. This represents a definite step up from the standard DVD.

The DTS HD Mono audio doesn’t offer any real depth, or range, but dialogue is clear. There are no real hisses or pops to report, and the score of Dimitri Tiomkin (Strangers on a Train, Dial M for Murder) comes through nicely.

There are no subtitles included.

There are no extras available.