Based on a play by Philip Barry, Holiday is the third film starring Cary Grant and Katherine Hepburn and their third with director George Cukor. Released in 1938 around the time Katherine Hepburn was being called “box office poison,” she gives one of her more heartfelt performances. A romantic comedy, Holiday has a surprisingly serious undertone that could be considered ahead of its time.

Johnny Case (Grant) has just returned to New York City from a vacation in Lake Placid, where he met, fell in love with, and proposed marriage to a girl, Julia (Doris Nolan). When he goes to the address she provided, he is surprised to learn she is Julia Seton of the New York Setons, one of America’s wealthiest families. She lives in a big mansion with her father, sister and brother. Initially reluctant to embrace an outsider, Edward Seton (Henry Kolker) soon wants Johnny to join the family banking firm. A witty, hardworking young man, he must be better than his alcoholic son, Ned (Lew Ayres). The older daughter Linda (Hepburn), is far too serious for her own good. She never really got over their mother’s death years earlier.

The self-described black sheep of the family, Linda takes refuge in the fourth story playroom. It’s the one place she feels safe and in control of her own life. Her brother Ned, who once dreamed of being a professional musician, never got over their mother’s death either. Forced to join the family business and suffering from an inability to please his father, Ned drinks a lot.

Johnny is surprised to learn that Julia wants him to settle down and simply go about making as much money as possible. However, Johnny has been working steadily since he was ten years old. By all accounts, he’s well respected on Wall Street. After twenty years, he wants to enjoy life; retire on his own money, see the world and return to work at something he finds fulfilling. As Julia becomes less supportive of Johnny’s plans, Linda admires his plan and finds herself attached to him. “You’ve got no faith in Johnny, have you, Julia? His little dream may fall flat, you think. Well, so it may, what if it should? There’ll be another. Oh, I’ve got all the faith in the world in Johnny. Whatever he does is all right with me…”

While Grant and Hepburn are wonderful together, Lew Ayres performance is sobering, particularly for era. In one scene, he gives Linda one of the best descriptions of what it feels like to be drunk committed to film. Julia appears sympathetic in early scenes, but soon shows herself to be the demanding heiress her father would respect and therefore, the least interesting of the Seton children.

As expected, George Cukor directs Holiday with a practiced eye, filming the Seton mansion with a series of graceful camera movements. The middle-class apartment of Johnny’s friends a professor and his wife (Edward Everett Horton and Jean Dixon) provides a stark contrast to the cavernous Seton mansion.

Presented in the 1.37:1 aspect ratio, Criterion has remastered the transfer in 4K. The presentation is impressive throughout, offering solid definition and detail, as well as a fine filmic texture. The Seton mansion and the opulent production design of Stephen Goosson shines. The presentation is clean, free of any scratches, debris, or signs of age.  Criterion has delivered an excellent transfer.

Remastered from the original optical soundtrack, Holiday sounds wonderful. The monaural LPCM audio is clean and clear throughout. There are no pops, hisses, crackles or other distortions. 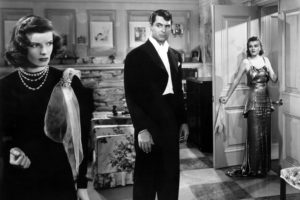